Went to the Bardge in Long Eaton yesterday afternoon to see a new group. Lots of friends and way too much beer with good music makes for a great Sunday afternoon. That much beer that I actually went up to the lead singer after they had finished and asked if he could play another Steve Earle number. The guys were so nice that they played 2!! Then when thanking him for doing so after he gave me 2 of their CD’s!!! 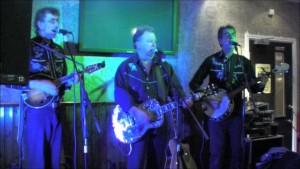