Well it’s the day after Halestorm and I’m still feel’in good! As the day goes on I feel even better as I think I will be see The Cadillac Three at the Slade Rooms in Wolverhampton later!!

I cannot put into words how much this band make me smile when they are plying live! There are many reasons such as the passion ,happiness and gratefulness that they put into their show. It could be the down deep and dirty guitar and vocals. It could be the brill words to their songs or it could be all this and that something extra that makes me just smile all the way through the show!!

I have a lot more gigs lined up this month but if I don’t make any more, no problem I have been to these two!!!

Below are a few pics I took will my phone. 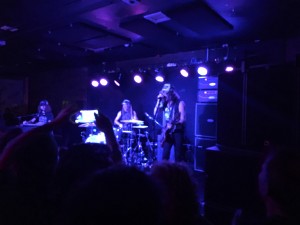 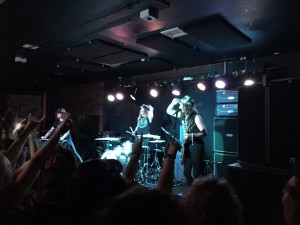 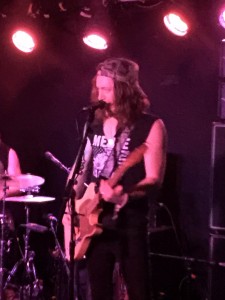 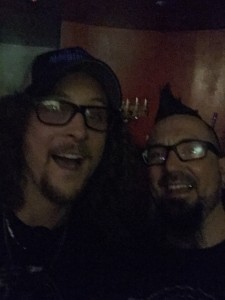 Me and the ultimate fan pic!!! 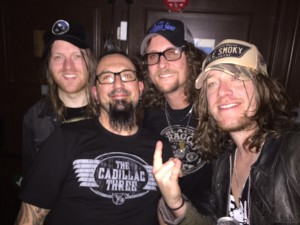 And here is a review of show (unbiased , not by me, haha)

It’s not unusual to see fans taking pictures of bands at concerts.

But stars taking pictures of the crowd muttering the words,”My god, my baby back home’s never gonna believe this”… Now, that’s rare.

The enthusiasm from hillbilly rockers The Cadillac Three was as infectious and electric as their music last night, as they stood before crowds in Wolverhampton long-haired and fresh-faced, grinning ear-to-ear throughout the set.

After informing the Slade Rooms crowd that they were both jet-lagged and drunk, the highly-talented trio launched into heavy high-paced hit Party Like You, which saw the crowd explode, dancing and singing along as the band rocked out above.

And, as vocalist and guitarist Jaren Johnston began to sing the opening verse to White Lighting, the keen crowd below loudly joined him – stopping him in tracks, as he was left stunned at their knowledge of his lyrics.

“You’re gonna make me cry!” laughed gobsmacked Johnston, before continuing with his beautiful performance of the country rock number.

But it was the group’s performance of lively, edgy hits Get Your Buzz On and I’m Southern which truly showcased their talents, as Johnston showed off his wonderful Deep South vocals, with both impressive strength and excellent range.

The set-up of the group was unusual too – as drummer Neil Mason delivered thrilling beats sat up front in the middle of the stage – between excitable, grinning Johnston and cool, curly-haired Kelby Ray on the rarely-seen lap steel guitar.

“Good evening, we are The Cadillac Three – all the way from Tennessee,” shouted frontman Johnston.

With the enthusiasm shown by their fans last night, the group could have filled the Wulfrun, never mind the Slade Rooms.

Please do Jaren, we can’t get enough of you.