Last night I went to the Rescue Rooms and saw the Quireboys for the first time even though this was their 30th anniversary tour!

The Rescue Rooms is a great venue and the Quireboys were fantastic! I got lost in the music, like I was 18 again!! 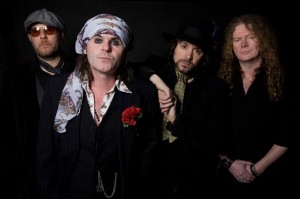 Here is a review from the Nottingham Evening Post:

The Quireboys land, strolling on stage with drinks in hand to rapturous applause.

They get down to business drawing from their bulging back catalogue and fusing the old with the new.

Latest album, Beautiful Curse is ushered in by the glorious Too Much of a Good Thing which stood well against the classics. Guitarist Guy Griffin and keyboardist Keith Weir combine irresistible hooks and melodies.

If other Quireboys have come and gone then the enduring frontman wearing his trademark bandana and that Jagger swagger has remained the constant during the last 30 years. Spike’s voice has a ‘lived-in’ quality these days but he works the crowd effortlessly, bestowing the flower from his buttonhole on a lady that catches his eye.

His mike stand seems to be an extension of him as he wields it, narrowly missing those in the front row.

This was a night of nostalgia with This is Rock’n’Roll followed by Mona Lisa Smiled that had guitarist Paul Guerin cranking out the bluesy riffs despite a broken finger.

The bittersweet ballad I Don’t Love You Anymore is the highlight, before the band bring the party again with Hey You followed by 7 O’clock.

There’s no way they’re finishing without an encore and out they come with Dirty Town and crowd pleaser Sex Party.

Let’s raise a glass-or-two-to The Quireboys, still in love with rock ‘n’ roll.